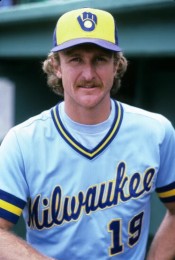 Today’s game was an old fashioned shootout. And more often than not, when the Milwaukee Brewers are involved in a shootout, it’s their opponent who ends up bloodied.

Such was the case today. There was no pitching early. The Brewers scored at least a run in each of the first four innings. After building an 8-4 lead, Randy Lerch and the Brewers’ bullpen couldn’t hold it. The Indians scored in five of the first seven innings, including two in the seventh that would put this one into extra innings.

That’s right, after scoring eight in the first four innings the Brewers were stymied until the 10th. How did that happen?

Oh, Lewallyn has made some appearances in the Majors since 1975, but he’s never made more than seven in a season. But as far as we could tell today, the 28-year-old is a five-time All-Star.

Once Lewallyn took over with two down in the fourth, offense stopped for the Brewers. He retired 14 straight before Gorman Thomas finally reached on a single in the 9th. But it wasn’t until the Indians went to the well one last time that the Brewers finally struck.

After losing in his first appearance of the season, Rollie Fingers blew the save today. Should we be concerned? Not really. The run he allowed wasn’t his own, and he pitched 3 1/3 innings of scoreless ball. So maybe Rollie isn’t perfect, but he’s still plenty good.

There is a piece of bad news for the Brewers on the injury front. Shortstop Robin Yount re-injured his hamstring while rounding first on a single in the fourth inning. He was removed from the game. No news yet on the severity of the injury, but he’s been struggling with that leg all spring.

Game Notes: Moore’s 10th inning blooper over a drawn in infield that won the game likely would have been caught if the shortstop or second baseman were playing at normal depth … Alan Bannister of the Indians opened the 10th with a shot down left field line. Oglivie nailed Bannister at second in a key play … In his first game back from injury, Ted Simmons hit two singles and a two-run double in six at bats … Charlie Moore, who had played catcher in Simmons’ place, started in right field … Larry Hisle went 0-for-5 and is 1-for-20 this season.