MILWAUKEE — Cecil Cooper must have been floating on air. I was too, though, my feeling of weightlessness was aided by a Serta Sleeper mattress. 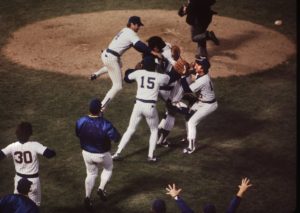 As soon as Robin Yount‘s throw landed in the webbing of Coop’s glove, I jumped off the bed in my parents’ room and landed in my dad’s arms, yelling and celebrating the Crew’s first trip to the Fall Classic and the first Milwaukee team to play in the World Series since my dad was a 10-year-old in 1958. Never have I been so happy to see a routine 6-3 putout in all my life.

There were so many great moments (which far outweighed the lousy ones — four errors?) in Game 5, but I’ll have no problem remembering them.

Molly’s baserunning. Moore’s hose of Reggie Jackson at third base. Benji’s tater. Moore’s infield bloop. Coop signaling for the ball to drop from the sky like an apple falling from the tree. And, of course, the dangerous Rod Carew grouding into the final out. Good lord, I could have crapped diamonds during that final inning. Instead, my only sense of disappointment came from not being able to rush onto the diamond with Loomer and celebrate on sacred ground.

Scratch that. I am a little disappointed in another outcome from the weekend. I should be basking in this euphoric afterglow (at least I think it’s afterglow…). Yet, I can’t help but think the Crew, though triumphant, was shorted in the hardware department. Pete Ladd, our hulking closer, should have been named MVP of the ALCS, not the Angels’ Fred Lynn.

Granted, Lynn played stellar ball, hit .611 and had a sick slugging percentage of .889. But here’s the important point: his team lost the series. That should automatically disqualify any player from winning MVP. Whenever Lynn looks at the award, it will mock him and the Angels’ failure to win one more game with three chances to do so. He’ll probably mock the award in return and use it as a doorstop.

Ladd, meanwhile, had big shoes to fill as Rollie Fingers is the greatest fireman of all time. Ladd, with his size-15 feet, more than did the job. He saved two of the three most important games of the season: Game 3 and Game 5. He didn’t give up a hit. He didn’t walk an Angel. He struck out five of the 10 batters he faced. He was perfect. He was the MVP.

That’s quibbling though. The Brewers are headed to the World Series to face the St. Louis Cardinals, the team with the most world championships this side of the Yankees (22) and the vagabond A’s (eight). But they’re none of our concern today. Tomorrow, in St. Louis, yes. Today, no. Our joy belongs to us. This feels new and fresh and filled with relief. The Crew had been dead in Baltimore. They were buried in California.

Yet today, they live and breathe and quite possibly will be favored in this series despite the Cards having four of the seven games at home because the Crew’s pitching is equal to that of St. Louis and the offense is far better. The Brewers don’t have the Cards’ team speed (no one does), but that may be the only other place where St. Louis has an advantage.

The Crew even has the advantage when it comes to beer. Bud blows. Give me a Miller High Life (or my grandpa, a Pabst Blue Ribbon, of which he has a half barrel in his basement bar) any day. We’ll give you the Clydesdales. They’re pretty cool.

But the World Series isn’t horse play. It’s serious business and the Cards are a serious foe. Still when the final out is recorded, I have a feeling the Crew will ride off into the sunset. Possibly on those Clydesdales and more than likely with the Champagne of Beers in their hands and Champagne in their eyes.

Until then, however, October 10, 1982 will be a day that will captivate the Brewers fan in me for the rest of my life.