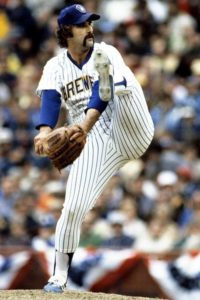 After a 13-1 rain-delayed debacle in Game 6 that was as ugly and as soggy as it sounds, the Brewers have to pick themselves off the stained carpet of Busch Stadium, wring themselves out and get back to fighting.

Again, the Brewers face an ultimate game whose results will have ultimate consequences. Win and they’re world champions. Lose, and they have a long, cold winter thinking of what could have been.

Now, here’s where it gets tricky. Harvey Kuenn is going to hand the pea to Pete Vuckovich, the Brewers’ Cy Young candidate. Normally, such a move wouldn’t be questioned. But, in this case, it should be.

Vuke got cuffed around in Game 3. He hasn’t been on his game this postseason. We have mentioned that he hasn’t been the same since throwing 160-plus pitches in an 11-inning game in Septemeber. While he’s been man enough to not refuse the ball, and he won’t refuse the ball here, he’s not the man for the Crew on the hill. Harvey should put Mike Caldwell on the mound.

Caldwell is a horse and he’s completely befuddled the Cards throughout this series. He’d be going on three-days rest, but the Cardinals have yet to figure him out. There is no margin for error in a Game 7.

The Brewers, meanwhile, have yet to figure out Joaquin Andujar, the man who will pitch for the Cards, the man who is 2-0 this postseason.

First pitch of the rest of their baseball lives is at 7:20 p.m. ET.

As always, if you can’t watch the game or listen to it, you can follow our tweets at @tweetsfrom1982.