ANAHEIM — We’re in Anaheim and properly jet-lagged. The only cure for jet lag is a few brews. Logically, we have been looking for a place to tailgate, but finding nothing. We’re not in Milwaukee anymore, people. Luckily we’ve found some other Brewers fans in a nearby watering hole. Tip another! 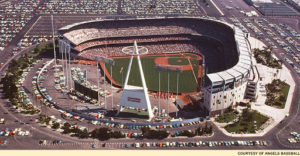 Sure, we’re still celebrating that big win against the Orioles. While we may have felt a sense of accomplishment after the Brewers finally clinched the AL East, those feelings will soon be replaced with jitters. How will the Brewers fare on the big stage? It’ll be a nationally televised game, the only game on tonight. The NLCS doesn’t start until tomorrow.

We’ve got Mike Caldwell up against the Angels’ version of Don Sutton, Tommy John. You may recall that John was among the pitchers available in August, and the Brewers struck instead with Sutton. John has been excellent since being acquired from the Yankees, going 4-2 with a 3.86 ERA.

Mike Caldwell has been the Brewers’ iron man this season, throwing 12 complete games and three shutouts. Don Sutton and Pete Vuckovich may get all of the attention, but Caldwell has been nearly as good, going 17-13 with a 3.91 ERA. Caldwell had a rough time in his last start against the Orioles (seven earned runs on 13 hits in seven innings), but he’s also pitched seven innings or more in 14 consecutive starts. Rest comfortably with Caldwell on the hill, Brewers fans.

Caldwell has a tough assignment in the Angels. California finished the regular season strong, winning their final three games against the Rangers and taking 11 of their last 15. This is a strong team, both offensively and defensively. The Angels ranked second in both runs scored and runs allowed, so Harvey’s Wallbangers will have their work cut out for them.

Eesh. That’s a lot to worry about.

Quite frankly, the Angels are just as good as the Brewers. Both teams will score runs. Both teams have solid pitching, thanks largely to late-season additions. Any disparities are minimal.

Big game, Brewers fans. Our team needs this one. The final win of the regular season should provide some momentum. Win this game on the road against the Angels’ best pitcher, and it’ll be smooth sailing.