Now let’s take a look at the crazy people behind this thing. 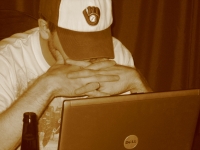 Born in Wisconsin, I grew up with Robin Yount, Paul Molitor, Rollie Fingers, Cecil Cooper and the rest of the gang. Only seven years old in 1982, I simply assumed that winning was easy. Have some missing pieces? Swing a deal for a future Hall of Fame closer, future Cy Young award winner, and one of the greatest offensive catchers of the era. Easy!

As important as baseball is in my life, I fully understand that if the Brewers hadn’t been such an entertaining team in those formative years, I may instead have interests in Origami and dance. It was because of those Brewers teams that I was mesmerized by every movement on the field. I played baseball. I lived baseball. I collected every baseball card known to man. And I grew to respect the history of the game.

Of course, things weren’t so entertaining for Brewers fans once Paul Molitor and Robin Yount left town in the early ’90s. And things got downright ugly until the likes of Prince Fielder and Ryan Braun rolled in. But it’s because of those ’80s teams that I still hold out hope. And it’s because of the pain of rooting for a loser that victory will be so sweet. 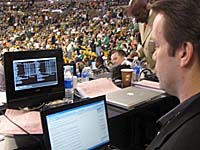 Born in Milwaukee the same year as the Brewers — 1970 and I attended my first game when I was three or four years old. All I remember was that it was Ball Day and by the sixth inning I had pried the ball open to find it was filled with paper covered in Asian characters. That, and when the Brewers hit a homer, I was overwhelmed by the noise and started crying.

Alas, it was the beginning of a beautiful fandom even though the Brewers have left me in tears many times since then. The last time that happened: Game 2 of the 2008 Division Series in Philly. In the first inning, Brett Myers walked the bases loaded, then walked home a run to give the Crew a 1-0 lead. After watching his teammates take eight straight balls, Corey Hart swung at the first pitch — out of the strike zone, of course — and grounded into an easy as 1-2-3 double play. Dale Sveum may have been managing at the time, but old Ned Yost habits died hard.

Despite the lifetime of pain, the Brewers remain close to my heart. I was part of a record crowd on Opening Day in 1977 when Jerry Augustine lost 1-0 to the Orioles. I was in the left field upper grandstand when Rollie Fingers threw a 1-2 fork ball past Lou Whitaker to clinch the 1981 second-half AL East title. I stood in line in the rain at George Webb’s waiting for my burger in 1987. I was there for Robin Yount’s 3,000th hit in 1992. Of course, like the rest of Wisconsin, I lived and died with every pitch in 1982.

I haven’t spent much time in Wisconsin since 1995 (first among Cubs and White Sox fans in Chicago, now among Yankees, Mets, Red Sox and Phillies fans in the greater NYC area), but, when I get back to Sconnie in the summer, we make the trip to Miller Park. There’s a reason my wife and I write off MLB Extra Innings as a business expense.

That’s what I’m waiting for — a Brewers’ WS win. Then, finally, I’ll weep again for the Crew — this time for joy.

It was the summer of 2010 and I was searching Twitter for some good Mariner handles to follow when a tweet from @tweetsfrom1982 popped up with a tweet about the Brewers playing Seattle in 82. I was instantly intrigued, went to their timeline and have been hooked ever since. I was 8 during that season but remember my friends and I had a chart following Rickey Henderson’s thefts once he hit 30 and didn’t look to be slowing down. I attended a game in the kingdome that year and saw him steal a base in person. I attended Gaylord Perry’s 298th or 299th win and my Dad bought me a 300 Wins is nothing to spit at shirt that year too.

I remember Yount, Molitor, Fingers, Vuke, Cooper and Thomas from the days when I first got into baseball and collecting cards. The 82 series is the first WS I can remember as I got wrapped up in the Wizard of Oz (Ozzie Smith) and Harvey Wallbangers hype. I remembered it was a great series but forgot the outcome making last summer and fall’s ride through the playoffs all the more exciting. I was at a conference for work as game 7 was being tweeted and remember getting choked up when I found out they had indeed run out of magic that year. It was then that I knew I wanted to be a part of this very creative Twitter team.

Born and raised in Seattle, WA I also came to see how much I had in common with Brewer fans being a Mariner fan myself. The constant disappointments, the teams that teeter on greatness but fall short (116 wins in 01 ring any bells?), and watching great players not achieve a championship. Starting each April full of hope only to realize it’s just another season to follow stats by the All Star Break.

It all started with a DM to Jon Loomer one day on Twitter. I should have known there might be time and effort involved based on the quick and enthusiastic response. Though I had no clue what I was getting into it has definitely been fun and seriously feeding my baseball stat inner geek. Just reading through what The Streak (Molitor’s) did for the fans in Milwaukee during 1987 and to actually get caught up in it myself has been an added bonus. Can’t wait to see what’s next and to help it unfold.