MILWAUKEE — Phew. And what the hell? 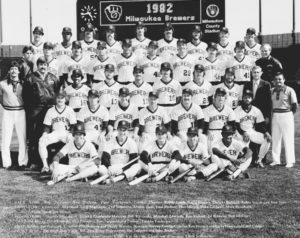 For Brewers fans, winning Game 3 5-3 was a huge relief and made possible a Game 4.

The what the hell was for the Brewers “fan” who reached over the railing in the eighth inning to give Bob Boone of all people a home run. Word to the wise, or in this case, not-so-wise: keep your f#cking hands to yourself. Don’t you know what’s at stake?

Good lord, if you see Ben Oglivie with a beat on the ball, let him catch it. Either get to the yard early to get a batting practice ball or buy a souvenir at a stand. Don’t steal it from the field of play.

Now that’s out of the way, the Crew has another chance to extend the series against nemesis Tommy John, who completely befuddled them in Game 1. Still, it’s news that John is pitching in Game 4 at all. Angels manager Gene Mauch, who piloted the 1964 Philadelphia Phillies to an epic collapse, has opened the door to another by shelving the man who would have normally started, Ken Forsch.

“He didn’t have to give me an explanation,” Forsch said of Mauch, The New York Times reported. “I didn’t need one. …I’m not mad, or angry, or anything. I’m just disappointed.”

The Brewers must be disappointed to see John again, who baffled the Brewers in Game 1. Or maybe they’re relieved that John’s going on three days rest and they won’t need to face Forsch. Either way, it shouldn’t matter. The Crew needs to win to force a winner-takes-all Game 5.

While the Angels have messed with their rotation, the Crew has altered its rotation as well as Moose — MOOSE! – Haas takes the hill. Normally, it would be Mike Caldwell, but Kuenn must be saving the lefty. Either that or he has guts. Or he’s a fool.

Haas made way for Don Sutton in the rotation and hasn’t started since Labor Day. Instead of preventing coronaries, he’s induced them. Kuenn is making the right move by giving the pill to Moose, who last pitched on Oct. 2 in Baltimore, where he pitched four innings and gave up a run in relief. It was a good outing considering the rest of the staff surrendered 10 runs in that debacle.

As Brewers fans know, the Crew can ill afford another debacle. They need to make it to tomorrow. Game time is 12:00 p.m. CT.

Then, anything can happen.