MILWAUKEE — This is why the Brewers gave up three prospects for Don Sutton.

The Brewers were held scoreless by Petry through seven innings on only three hits. Meanwhile, Sutton had blanked the Tigers as well on six hits. In two starts with his new team, the Brewers had provided two runs of support.

“I had been reading the box scores all summer,” said Sutton. “I knew what these guys could do. They just wanted to break me in, not have me take it for granted.”

In the eighth inning, the Brewers offense figured the initiation of Sutton was complete. Ed Romero, Paul Molitor and Robin Yount hit consecutive one-out singles, with Yount’s hit scoring Romero. Then Cecil Cooper hit a three-run blast to right to cap it off.

Sutton’s final line was exactly what the Brewers had paid for, and then some: Nine innings, no runs, seven hits, no walks, nine strikeouts. And, most importantly, the win.

The shutout was Sutton’s 56th of his career, tying him with Bob Gibson for ninth all-time. Brewers catcher Ted Simmons caught a few of those from Gibson as well.

“I just followed Simmons all night long,” Sutton said. “I think I changed two pitches from curveballs to sliders. But I followed him all night long.”

Sutton had the Tigers pounding grounders all night long. The outfielders had to be bored, accounting for only five of the 27 outs. Only three Tigers reached as far as second base, and only once were there two runners on base at a time.

“I’d say he was worth the investment,” manager Harvey Kuenn confirmed.

There is no doubt after this game. Brewers fans aren’t even phased by the fact that Frank DiPino, among the prospects dealt to Houston, made his sparkling debut tonight, striking out 10 and walking none in five innings.

If Brewers fans have anything to worry about, it’s closer Rollie Fingers, who has been forbidden from even picking up a ball. The slight tear in his forearm will be examined tomorrow.

MILWAUKEE — On August 30, the Milwaukee Brewers acquired veteran pitcher Don Sutton from the Houston Astros in a blockbuster deal for three unnamed players. No reason was ever given for why the names of those players were not immediately released even though they were known by both clubs. We now know.

All three were players who were held in high regard in the organization. Bass, 23, was viewed as the future heir to right field, the one offensive weakness of this current team. He starred for Vancouver this season, hitting .315 with 17 homers, 65 RBI and 23 stolen bases. On the flip side, he didn’t get a hit in nine at bats for the Brewers and was eventually sent down in favor of Marshall Edwards.

Though the 25-year-old DiPino never played on the Brewers’ roster this season, he actually made two appearances last season, pitching 2 1/3 hittless innings. In his second season with Vancouver, he was solid though unspectacular, going 13-9 with a 4.03 ERA.

The 25-year-old Madden impressed this spring, but he struggled mightily in Vancouver. He went 3-8, entirely as a starter, with an ugly 7.03 ERA and 60 walks in 80 2/3 innings. It was actually his second disappointing season after cruising through two years of A ball.

Will Brewers fans regret giving up any of these players? Only time will tell. But if Sutton can take the team to the playoffs and beyond, these names will be forgotten.

We now have confirmation from general manager Harry Dalton that the trade has been completed. Dalton says the deal was in the works for nearly a month, but the pieces finally came together today. Since the deal was made before rosters expand on September 1, Sutton would be eligible for the playoff roster.

That was the professional report. Now, the fan reaction…

Don Sutton has 274 career wins. Don Sutton. On the Milwaukee Brewers. This… is… awesome.

Sutton is having a terrific season with Houston, going 13-8 with a 3.00 ERA. The ERA may be a bit deflated in a league in which pitchers hit, but it’s obvious this is an enormous upgrade for the Brewers. This is how the Brewers rotation now stacks up, assuming none of the current members are involved in the deal:

And Doc Medich either heads to the bullpen or retires to be a doctor or something.

Not so bad, eh? This is a playoff rotation, my friends.

Let the speculation begin on the three players heading back. The Astros, at 62-69 and fifth place in the NL West, are in rebuilding mode. In all likelihood, they want prospects. That’s perfect for the Brewers since they would not want to shake up the current roster, considering how great the chemistry has been.

Brace yourself for top prospects heading the way of the Astros. I’m just hoping it’s not Randy Ready, Kevin Bass or Frank DiPino.

The Brewers didn’t play their best baseball today. They really didn’t deserve to win. But the Seattle Mariners simply gave them too many second chances. Eventually, the Brewers won by default.

The Mariners took a 4-0 lead in the first inning thanks to an improbable rally. With no one on base and two outs, Al Cowens singled and Moose Haas walked both Richie Zisk and Dave Revering. Dave Henderson then launched a grand slam to put the Brewers into a huge hole.

Then the Brewers duplicated the start of the Mariners’ rally in the top of the second, again with two outs and no one on. Ed Romero, filling in for an injured Ben Oglivie, singled to center. Ned Yost walked. Jim Gantner then hit a routine grounder to Todd Cruz at short that should have ended the inning. Second baseman Paul Serna, though, was late covering the bag and everyone was safe. Paul Molitor reached on an infield single, scoring one. Todd Cruz then made a throwing error that scored two more runs. And Cecil Cooper singled in two more.

What do we have? Five Brewers runs, and although one of the runs was technically earned, none of them should have scored. Suddenly, the Brewers had a 5-4 lead that they didn’t really deserve.

Well, they did deserve it… Because the Mariners certainly didn’t deserve to lead. It’s complicated…

After that six outs of insanity, the bats went quiet for both teams until the bottom of the eighth. Once again, the Mariners struck with a long ball with two outs. This time, it was Al Cowens with a solo shot to tie the game at five.

But of course, this was not a game the Mariners were meant to win. Ned Yost led off the top of the ninth inning with a single to left. After Gantner bunted Yost over, Floyd Bannister was removed in favor of shut-down closer Bill Caudill. Let’s set the scene…

Caudill, known as “The Inspector,” entered the field to the playing of the Pink Panther theme song. Caudill was 10-4 with a 1.85 ERA. He has been close to automatic.

After a first pitch strike to Paul Molitor, the Kingdome organist giddily played The Inspector’s theme music again. Then on the next pitch, Molitor ripped a single to left that scored Yost, taking second on the throw, and giving the Brewers a 6-5 lead.

The Brewers scored eight runs in all, but only three of them should have scored. But sometimes, you can win by simply not being the worst team on the field that day. That was the case on this night.

The Brewers swept the Mariners and next play the Angels tomorrow in Anaheim. The Red Sox beat the A’s 4-2 to keep pace six games back of the Brewers.

Game Notes: The Brewers are in search of a right fielder and a left handed reliever. They did pursue outfielder Ellis Valentine of the Mets, but nothing materialized. … Frank DiPino has been dominating the Pacific Coast League and is expected to be called up when rosters are expanded to pitch the second game of a double header with Cleveland on September 2nd.

Bob McClure started and held the potent Orioles offense to three runs (two earned) on six hits in seven innings. Jim Slaton went the rest of the way and did what Jim Slaton does, allowing only a hit in two scoreless innings.

The Brewers got off to a good start in the first when Paul Molitor led off with a walk and Robin Yount then launched a homer to stake his roommate McClure to a 2-0 lead.

The Orioles would take the lead in the third when Dan Ford struck again with a two-run single. It was Ford who hit a grand slam yesterday to put that game out of reach.

The pitchers took over from that point until the eighth when a surprising defensive miscue gave the Brewers an opportunity. With two down, Mark Brouhard hit a routine grounder to rookie vacuum Cal Ripken, Jr.. Brouhard would reach safely when Ripken threw high to first, committing his first error in 44 games. After Molitor singled, Yount came through again with a triple off of the wall in right to give the Brewers a 4-3 lead.

The Brewers got some nice insurance runs in the eighth when Gorman Thomas led off with a booming home run to left and Marshall Edwards brought home Ben Oglivie with a sacrifice fly. But with Jim Slaton on the mound, those runs were merely recreational.

As has been the case so many times this season, Robin Yount was the star of this show. He went 2-for-5 and drove in four of the Brewers’ six runs. He is now hitting .313 with eight home runs and 36 RBI.

“If Robin Yount is not the starting All-Star shortstop,” said manager Harvey Kuenn, “then there’s something wrong with the balloting.”

Well, there’s likely something wrong with the balloting. As it currently stands, Yankees part-timer (and owner of a .153 batting average) Bucky Dent is leading all shortstops in the voting. Robin Yount sits third. Helplessly.

It’s okay. The Yankees can play in the meaningless All-Star Game. The Brewers will just keep winning the games that count.

Game Notes: The Brewers are considering calling up reliever Pete Ladd or starter Frank DiPino from Vancouver. Ladd is 9-1 and has allowed 32 hits in 40 2/3 innings. DiPino is 7-4 with a 3.17 ERA … Ted Simmons is second among catchers in the All-Star voting behind Chicago’s Carlton Fisk. Cecil Cooper is fifth among first basemen behind California’s Rod Carew. Molitor is seventh among third basemen behind Kansas City’s George Brett. Ben Oglivie is sixteenth among outfielders … Reliever Rollie Fingers (back spasms) may be available for tomorrow’s game … Cecil Cooper, who had been out of the lineup for five games with a hamstring injury, returned and couldn’t get the ball out of the infield in four at bats.

The future looks bright with up and coming stars like these three! Edwards’ twin brother Mike played in the A’s system, and younger brother Dave plays for the Twins. A bit of irony that the one Edwards brother who isn’t a twin plays for the Twins? 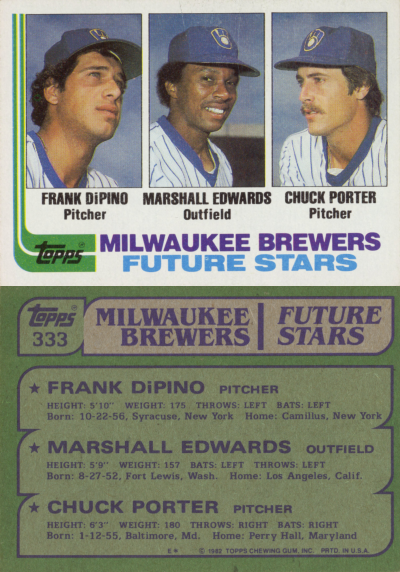